Inspired by the scenery in so many movies, New Zealand was on our bucket list right from the beginning. We traveled there in 2007, but it is still as fresh in my mind as the day we went (plus it helps to take copious notes and hundreds of pictures along the way.) For our first venture, we chose the North Island, flying into Auckland and then traveling by car to our first destination at Lake Taupo, for seven days. Prior to departing, we met with our traveling companions to discuss what we should try to see during our 14-day adventure. We each took a travel guide, highlighted what we liked best, then chose the outings that we both agreed upon. 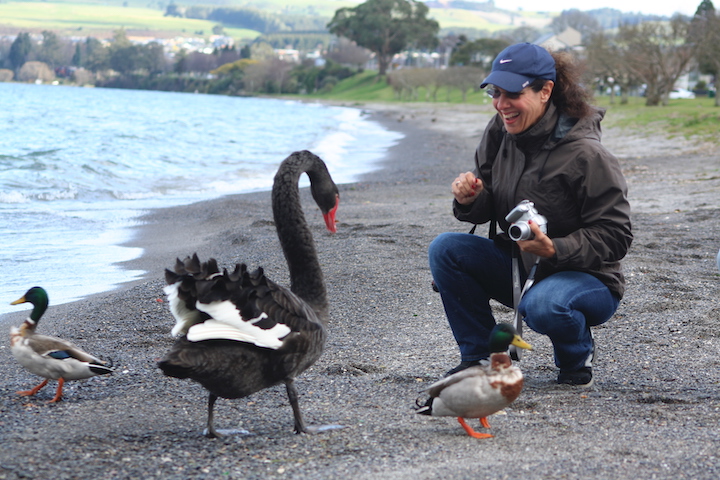 Tip: New Zealand is BIG and you're not going to see it all in two weeks, no matter what. The great thing is, that just driving from point A to point B is a tour in itself.

From Auckland to Lake Taupo was a seven-hour drive. After arriving at 5:00 am and a sleepless flight, this was no mean feat. However, we made stops along the way, starting in Hamilton, where we walked along the Waikato River, lunched in Tiru at the Settler's Inn (good) and enjoyed scenery along the way. We arrived at our destination at 1:30 pm and could not check-in until 3:30pm so we used our time to walk along the shores of Lake Taupo and encountered some beautiful swans.

Every day was a new adventure and it would take too many pages and too much of your patience to do a blow-by-blow of everything we did. As much as possible, we tried to see the most interesting sites within a reasonable driving distance to our hotel by Lake Taupo. During our first seven days, we visited:

Aratiatia Dam - The flood gates are opened three or four times a day, releasing 21,000 gallons (80 thousand liters) and restoring the river to its natural flow for a few minutes. It's an incredible site and well-worth taking the time to visit.

Tip: This is the location of the rapids used in the filming of Peter Jackson's movie, The Hobbit: The Desolation of Smaug. 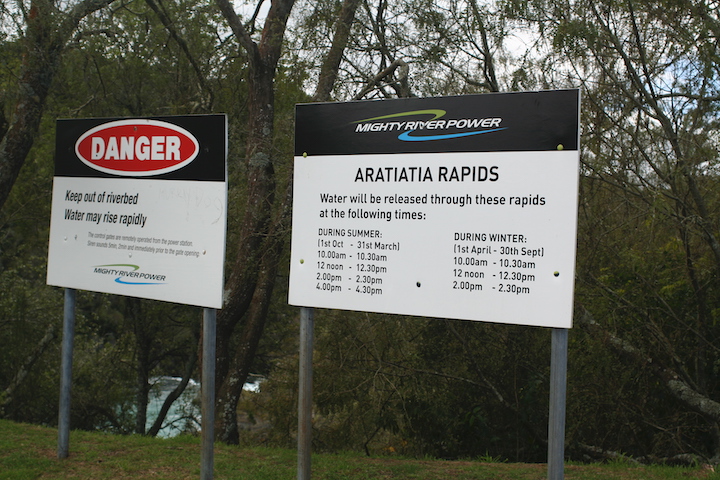 Huka Falls River Cruise - Again, a push for traveling a bit off-season, we had the boat to just the four of us and our Captain, Dave, who still runs this cruise today. Beautiful scenery, great narration. Power boats flew by us while on our way, but to really get the enjoyment out of the scenery and the landscape, this is the way to go. Note: Captain Dave was so nice. When my friend mentioned how much she loved animals, he invited us up TO HIS HOME, to pet his sheep, horses and cows. 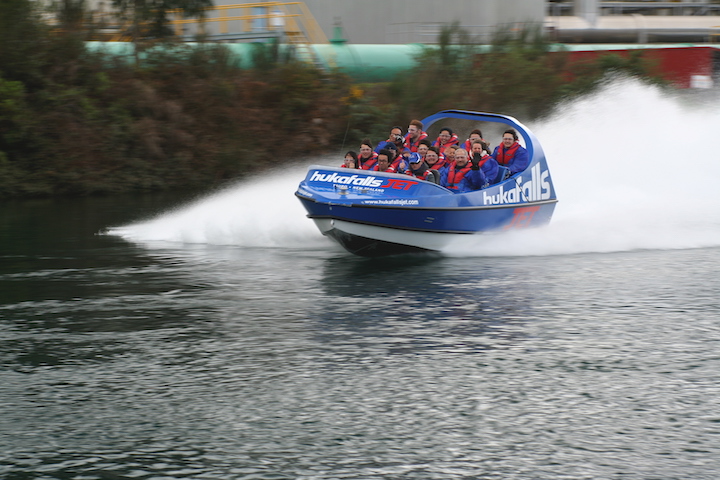 Locals say that New Zealand is the only place in the world you can swim in the ocean, ski in the mountains, fish in a river and hike through a volcanic landscape, and still be home for supper. We saw evidence of this when we spent a day driving to Mt. Tongariro, Mt. Ngauruhoe and Mt. Ruapehu, where early-season skiing was in full force. We also visited the town of Ohakune and a Trout Hatchery and we were still back by 4:00pm. 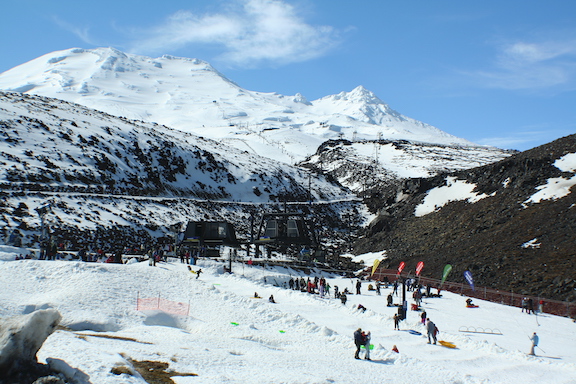 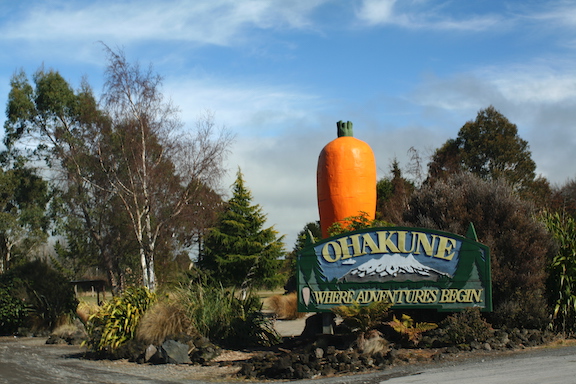 Waitomo Caves - Known for its extensive underground cave system, we walked through the Ruakuri Caves, which house stalactites, stalagmites and beautiful limestone formations. We also couldn't pass up a boat ride underground to see the famous Glowworm Caves. There were more extreme adventures, like donning wetsuits to visit the caves by inner tube, but we preferred to stay dry (and warm). Waitomo was about two and half hours, one way, from Lake Taupo, but again, the extensive and extraordinary scenery of New Zealand make long drives a pleasure. Photos not allowed. Photo of the glowworms courtesy of Newzealand.com

Opepe Memorial and nature walk - Just 15 minutes from Taupo. Short but beautiful nature walk to the area where several members of the Bay of Plenty Cavalry were killed by Maori warriors in the 1800's. The area is lined with huge Totura trees. We also spent half a day golfing (the men) and horseback riding (the ladies) where we could see the Craters of the Moon, the largest geothermal field in New Zealand, from the trail. Our friends also managed to sneak in a half day of trout fishing on Lake Taupo, where they were forced to give up a 17" trout because it was too small.

For our second week of adventure we first had to travel from Taupo, 315 miles to the Bay of Islands in Paihia. Along the way we stopped at Waimangu Volcanic Valley and purchased the self-guided, walking tour ($37pp) through the thermal park. We got there when it opened at 8:30am and didn't encounter another person during the time we were there. Because of our long drive, we couldn't spend as much time as we would have liked in this phenomenal, Jurassic-like national park.

We didn't hit any traffic during our stay, except as we passed through Auckland enroute to Paihia. Total stand-still. We arrived at the Club Paihia in heavy rain, about 8:30 pm.

Over the next few days we did some exploring in Paihia, visited the town of Kerikeri to visit Rainbow Falls and Haruru Falls and stopped at a funky kaleidoscope shop. It was chilly and rainy, which in case you haven't noticed, doesn't keep us from doing pretty much anything.

Our northern adventures on the North Island included:

The Kauri Walk in the Waipoua Forest, home to the largest (est. 2000 year old) and oldest (est. 3000 year old) known Kauri trees in the world.

We also visited St. Pauli's Dome where our husbands proceeded to hike to the top, whereas the ladies decided half-way up was just as good. They did get some spectacular shots from up there.

We spent our last day taking a three-hour cruise around the Bay of Islands, through Hole in the Rock and disembarking at Russell Island, where we visited Russell Museum and Christ Church. We only visited what we could walk to, but there is a lot more to see and do there. The ferry runs every 10 minutes between Paihia and Russell so you can return at your leisure after the tour.

With no time to spare, we used our departure day to see the Kawakawa Public Toilets by Hundertwasser, plus a short stop at the Whangarei Kiwi Museum because we didn't want to leave New Zealand without having seen a live Kiwi! No pictures allowed in their indoor habitat, but at least we were greeted by this lovely male Peacock in their outdoor gardens.

Clearly, New Zealand is not to be missed. It's naturalist paradise. Three weeks minimum and you still won't see it all, but it wouldn't feel quite so rushed. I might also mention that you drive on the 'other' side of the road, which takes some getting used to. Our next visit will be to the South Island and Australia, but we could easily return to the North Island to see what we missed.

Let me take you to New Zealand! Email me here!